There is a major difference between using your fingers to pick and using an actual plectrum (pick) for many reasons. Though many artists will employ the use of both, which we’ll get into later on in this program, the idea here is to forget that you’ve ever even learned to use a pick when playing fingerstyle guitar.

A few key differences when playing with your fingers instead of a pick are:

1. Using your fingers allows you to pluck or pick multiple notes that usually aren’t ‘pickable’ using a standard plectrum. Though there are times that you can do this, often when playing fingerstyle, it is much too difficult to ‘string skip’ in a way that is logical and easy to address. So, we ‘use what we have’ in fingerstyle, allowing us up to five fingers at any given time to play multiple notes. Artists such as Lindsey Buckingham and Chet Atkins employ this method and it can be heard on songs such as “Landslide” and “Big Love” (Buckingham) as well as “Wheels” (Atkins) to provide a beautiful non-plectrum-picked ‘airy’ or ‘open’ sound.

3. Your fingers naturally want to curve even when holding a pick, and believe it or not, your muscle memory will almost always retain this open position of holding a pick even when you are playing in fingerstyle. There are exceptions to this, depending on how you would usually hold a pick, but for the most part, it rings true.

Find that pick I told you to hide (hopefully you didn’t throw it away!) Hold it like you usually would when playing a riff or article of tab, often with your thumb and 1st finger. 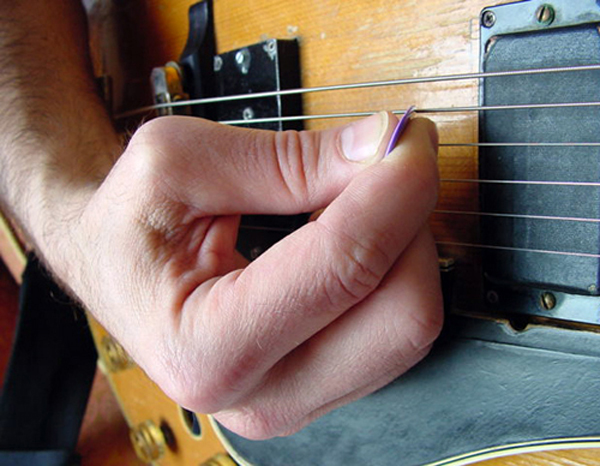 Now, keep your hand exactly in the same position, and with your other hand, remove the pick from the grasp of your fingers. More than likely, you are forming a “C” formation with your picking hand. Your 1st finger and Thumb are probably more ‘toward the audience’ than your other fingers. Your 2nd, 3rd, and 4th finger may even be right up against the body of the guitar. Are they?

If so, then you’ve already found the perfect position to finger any piece of tablature that you’ll come into contact within this program.

Since most guitars have six strings, and your hand usually only has five fingers (counting the thumb as a finger in fingerstyle guitar playing) you’ll probably notice that most of your fingers already loosely line up with the six strings on your guitar, minus of course one string for the lack of an additional finger.

The key here is to learn to completely separate your 1st finger and your Thumb. Doing this will help you start to develop the muscle memory that your fingers need in order to finger a multiple string attack using fingerstyle. Your other fingers will start to naturally cooperate by slowly spacing themselves away by ‘feeling’ the strings.

The main difference between fingerstyle and using a plectrum (pick) is that when playing with a pick, you tend to ‘feel’ the strings by using the tip or side of the plectrum. However, with fingerstyle, your actual fingers need to be the guide for each other. You must force yourself to ‘feel’ the strings with your fingers because when you do so, your fingers will start to line up with the appropriate number of strings you need in order to play a given melody.

In the next lesson, I will show you how to properly apply your fingers to the strings on the body of the guitar so that every string loosely lines up with your finger placement.